Stopped in at Unbeaten CrossFit today in Staten Island. Great group of guys… a bunch of them are firemen which I always respect. Nice clean box…. fairly new.. but has that old style “original” box feel.  Not that Equinox feel, but thats not what they’re going for.

Ended up doing some kettle bell technique. Efficiency during (kettle bell swings)KBS is key because it’s an exercise that is normally done for a fair amount of reps. So, it goes without saying that poor form and power leakage has a compounding effect. The positive of that is by making small changes that minimize power loss we can have large effects on performance rather quickly.  All those in the “google generation” should love that instant gratification effect.

The #1 cause of power leakage during KBS is by far allowing the KB to drag us onto our toes.  This drastically reduces our ability to transfer power from our legs and is normally accompanied by a muted hip. If we don’t stay on our heels and extend our hips (drive your head toward the ceiling) we loose our largest power source. 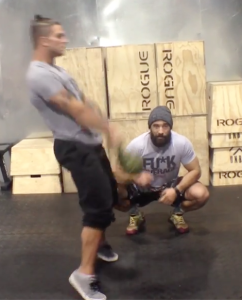 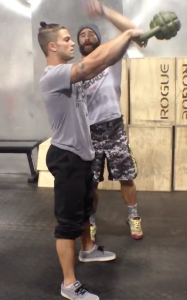 The second power leak I want to mention is what I call… Going elbows deep!  This is bad for several reasons. First, it’s not ideal for our back. The more horizontal torso angle increases stress and the likelihood of an overstress injury. Additionally, it robs power… By allowing the weight to travel away from the hips we reduce the effectiveness of the power generated during explosive hip opening. (think of a slingshot .. you would want the marble up tight to the cord, not hovering several inches in front of it. 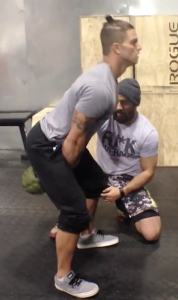 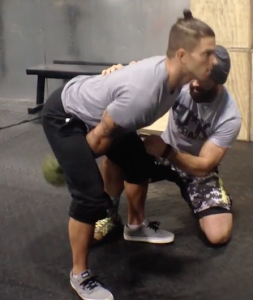