How many of you have had persistent knee pain. Pain that just doesn’t ever resolve no matter how many times you roll out your knee. A long time ago a man named Levitt said “He who treats the site of pain is lost.”  That isn’t true 100% of the time. But it damn sure seems it is more than not.  Basically what we are saying is “site” and “source” of pain don’t have to be the same. In today’s case if we just take a look at the anatomy it makes a lot of since. 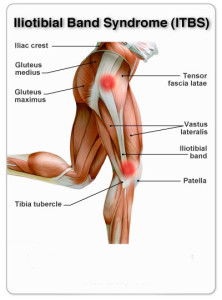 Don’t worry about the ITBS stuff. I just needed a picture to demonstrate that treating way up in the hip can effect the knee. Notice the area marked tensor fasciae latae is well away from its distal (down stream attachment).  Signified by the white is dense tendon type material that doesn’t lengthen much with stretching and rolling…. hence the reason you can be hitting those road blocks. The meaty part located in in the hip tends to respond more favorably to rolling and mobilizing.

So lets mash out that hips and see if we can’t just reduce our knee pain.

Episode 660 P365: Do You Twist When Lifting Overhead